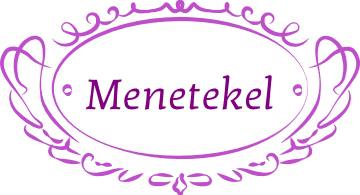 (Aramaic, “meneh tekel u pharsin”), “Menetekel” is the denotation of a warning signal, respectively a warning sign. This denotation goes back to an eerie sign that appeared on the wall during a banquet given by the Babylonian King Belshazzar. Daniel was the only prophet who could interpret this sign. “>Number, weight, division<, This is what it means: Number, God has numbered the days of your kingdom and brought it to an end; weight, you have been weighted on the scales and found to be too light; division, your kingdom is divided up and given to the Medes and the Persians.” The same night Belshazzar, the king of Babylon, was killed and his kingdom given to the Medes and the Persians. If someone “displays a Menetekel” he gives a warning sign, respectively he points to a looming disaster.